Lab- Find the focal length of a convex lens

Procedure
Measure the focus of a real lens. Using a source far away (several meters) find the point where the image of this distant source is brought to a focus on a screen. With the room lights dimmed use the light coming through the lab door or window as an object. How does this compare with the value printed on the lens housing?
Place the optical source at one end of the optical bench and place the white screen on the opposite end of the optical bench. Place a convergent lens between the source and the screen but nearer to the source and find the spot where a focused image of the source is projected onto the screen. Observe that the image is larger than the source because the image distance is larger than the source distance to the lens. Note the position of the lens. Measure the object distance do and the image distance di and use them in the formula
1/do + 1/di = 1/f
to find the focal length of the lens. Is it comparable to the value observed above? Is it similar to the previously observed values?

_3.2 Measuring the Focal Length – II
Place an object on one side of the lens and a mirror on the other side, as indicated in the figure below. 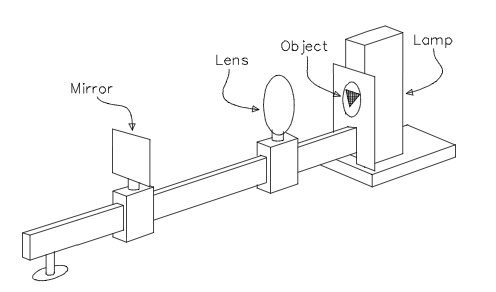 _When the object is in the focal plane of the lens (i.e., when S = f) all the rays from a point on the object, which pass through the lens, will emerge in a parallel bundle (much like the figure shown in section 2.1). The rays remain parallel after reflection from the mirror. Any reflected parallel bundle will then pass back through the lens and converge at a point in the original focal plane. The location of the focal plane can thus be determined by varying the object-to-lens distance until a sharp image is formed on the object screen it- self, where the object-to-lens distance just equals the focal length. By using the backlit small triangular screened opening as an object, you can observe the image superimposed on the object and move the lens until the image is sharp.
3.3 Lens Equation
Use the same setup as in section 3.2 but instead of the mirror, use a screen. Locate the lens more than a focal length away from the object and adjust the position of the screen until you get a sharp image on the screen. By measuring S and S', you can verify the lens equation.
With several measurements of S and S', make a 1/S vs. 1/S' graph and estimate a best-fit line. This permits a measure of the focal length to compare with your previous result.