click image to zoom in
AP Outline
A. Atomic physics and quantum effects (~7% of exam)
1. Photons, the photoelectric effect, Compton scattering, x-rays
a) Students should know the properties of photons, so they can:
(1) Relate the energy of a photon in joules or electron-volts to its wavelength or frequency.
(2) Relate the linear momentum of a photon to its energy or wavelength, and apply linear momentum conservation to
simple processes involving the emission, absorption or reflection of photons.
(3) Calculate the number of photons per second emitted by a monochromatic source of specific wavelength and power.
b) Students should understand the photoelectric effect, so they can:
(1) Describe a typical photoelectric-effect experiment, and explain what experimental observations provide evidence for
the photon nature of light.
(2) Describe qualitatively how the number of photoelectrons and their maximum kinetic energy depend on the wavelength
and intensity of the light striking the surface, and account for this dependence in terms of a photon model of light.
(3) Determine the maximum kinetic energy of photoelectrons ejected by photons of one energy or wavelength, when given
the maximum kinetic energy of photoelectrons for a different photon energy or wavelength.
(4) Sketch or identify a graph of stopping potential versus frequency for a photoelectric-effect experiment, determine
from such a graph the threshold frequency and work function and calculate an approximate value of h/e.
c) Students should understand Compton scattering, so they can:
(1) Describe Compton’s experiment, and state what results were observed and by what sort of analysis these results may be
explained.
(2) Account qualitatively for the increase of photon wavelength that is observed, and explain the significance of the
Compton wavelength.
d) Students should understand the nature and production of x-rays, so they can calculate the shortest wavelength of x-rays
that may be produced by electrons accelerated through a specified voltage.
2. Atomic energy levels. Students should understand the concept of energy levels for atoms, so they can:
a) Calculate the energy or wavelength of the photon emitted or absorbed in a transition between specified levels, or the
energy or wavelength required to ionize an atom.
b) Explain qualitatively the origin of emission or absorption spectra of gases.
c) Calculate the wavelength or energy for a single-step transition between levels, given the wavelengths or energies of
photons emitted or absorbed in a two-step transition between the same levels.
d) Draw a diagram to depict the energy levels of an atom when given an expression for these levels, and explain how this
diagram accounts for the various lines in the atomic spectrum.
3. Wave-particle duality. Students should understand the concept of de Broglie wavelength, so they can:
a) Calculate the wavelength of a particle as a function of its momentum.
b) Describe the Davisson-Germer experiment, and explain how it provides evidence for the wave nature of electrons. 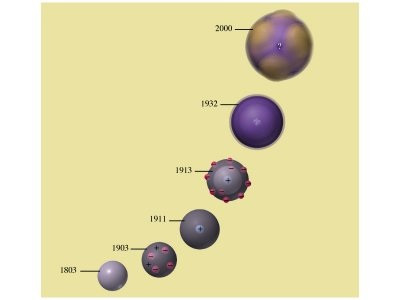 Light can be represented as a particle, called a photon. The energy of a photon is directly proportional to its frequency.

The potential energy of an electron at infinity is defined to be zero, and approaches "ground state", the lowest energy level, as n approaches 1.The change in energy of a transition is equal to the energy of an incident/released photon. For example, a transition from n=2 to n=1 would correspond to a photon with E=(-27420)-(-109678).

Occurs when an X-ray or gamma ray photon collides with an electron. The change in wavelength of the photon is equal to the Compton wavelength multiplied by 1 minus cosine of the angle between the scattered particles.

Particles also have wave-like properties.
The wavelength of a particle is known as the de Broglie wavelength, and is calculated using the equation above.

(See Simulations page for an applet of the Davisson-Germer experiment)