Note: To understand this chapter, you must first have understood the concept of electric field, which is covered in the previous chapter.

The name “electron volt” (eV) might suggest that it is a measurement of voltage, but it is actually a unit of energy. 1 eV = 1.6*10^-19 J
It is defined as the energy acquired by a particle carrying a charge whose magnitude equals that on the electron as a result of moving through a potential difference of 1V.

Electric potential due to point charges 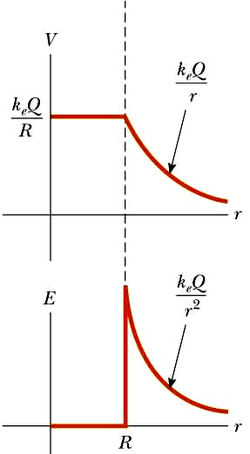 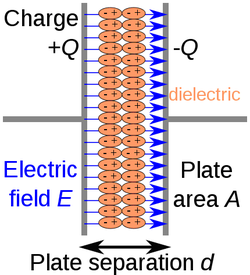 A capacitor is a device that can store electric charge, and consists of two conducting objects placed near each other but not touching. If a voltage is applied across a capacitor, the two plates are charged. Charge is accumulated on each plate, and it is found that the amount of charge Q is directly proportional to the magnitude of the potential difference V between them.
Q = kV, and we name this constant k, capacitance. Thus, Q = CV    C = Q/V

Capacitance is measured in coulombs per volt, and is given a new name called farad (F). 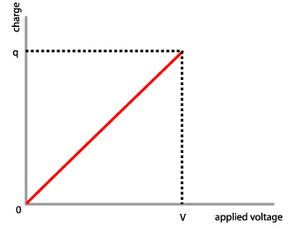 As the capacitor accumulates the charge, its electric energy is also increasing. The QV graph is a upward sloping curve with a constant slope, capacitance. The area under the QV graph then, is the electric energy.
PE = 1/2 QV = 1/2 CV^2 = Q^2 / (2C)