- Objects such as hard rubber, glass rod, or plastic ruler rubbed with cloth will display an effect known as static electricity.
- An object becomes "charged" as a result of rubbing and it possess a net electric charge; but it can also be "dis-charged" or neutral when it's grounded. (Earth is often referred to as a "sea of electrons")
- key concept: unlike charges attract; like charges repel (two types: positive/negative)
- law of conservation of electric charge: the net amount of electric charge produced in any process is zero; no net electric charge can be created or destroyed
Therefore if one object acquires a positive charge, then it is expected that an equal amount of negative charge will be found in neighboring areas. 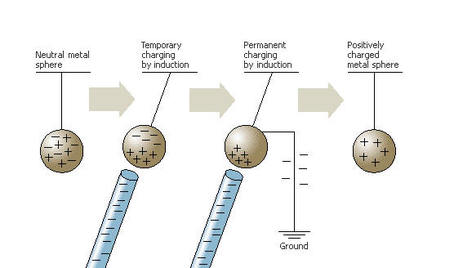 - Materials such as iron nails are conductors of electricity
- wood and rubber are considered nonconductors/insulators
- However, few materials such as silicon and germanium, are semiconductors
- Some electrons are bound very loosely and can move about freely within the material: free electrons or conduction electrons

- electroscope: is a device that can be used for detecting charge (ex. inside a case, two movable metal leaves can be split apart when a conductor is connected to the metal knob on the outside)
- electroscopes can be charge by induction or conduction.
- a previously charged eletroscope can be used to determine the sign of a charged object. 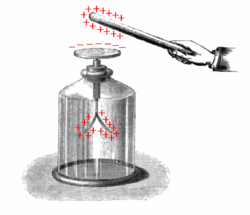 - It gives the magnitude of the electric force (F) that either object exerts on the other
- The direction of the electric force is always along the line joining the two objects.
- If two objects have the same sign, they repel. If two objects have opposite signs, they attract.
k = 8.988 x 10^9 Nm^2/C^2
- electric charge is said to be quantized (1e, 2e, 3e, etc.)
- if several charges are present, the net force on any one of them will be the vector sum of the forces on that charge due to each of the others.

- The electric field at any point in space, is defined as the force (F) exerted on a positive test charge placed at that point divided by the magnitude of the test charge q: E=F/q
- When calculating electric force from two different points, the force of the charges and it's angles can be treated like vectors. Calculate the x, y components separately and then combine it for the resultant force. 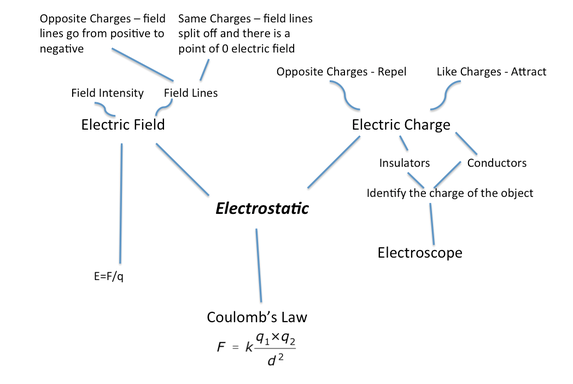 Here is a general visual of this chapter's concepts.