Three Labs that Have to Do With Newton's Laws

An Interesting Animation on Action and Reaction

An Interactive Cartoon on Newton's Laws of Motion

Are You Infected with this Misconception?

Two students are discussing their physics homework prior to class. They are discussing an object that is being acted upon
by two individual forces (both in a vertical direction). During the discussion, Anna Litical suggests to Noah Formula that the object under discussion could be moving. In fact, Anna suggests that if friction and air resistance could be ignored (because of their negligible size), the object could be moving in a horizontal direction. According to Anna, an object experiencing forces as described at the right could be experiencing a horizontal motion as described below.

Noah Formula objects, arguing that the object could not have any horizontal motion if there are only vertical forces acting upon it. Noah claims that the object must be at rest, perhaps on a table or floor. After all, says Noah, an object experiencing a balance of forces will be at rest. Who do you agree with?

Answer:
Anna is correct.
Noah Formula may know his formulas but he does not know (or does not believe) Newton's laws. If the forces acting on an object are balanced and the object is  in motion, then it will continue in motion with the same velocity. Remember:
forces do not cause motion. Forces cause accelerations.

An Applet on Newton's Second Law

Cartoon on Newton's 1st and 2nd Law of Motion 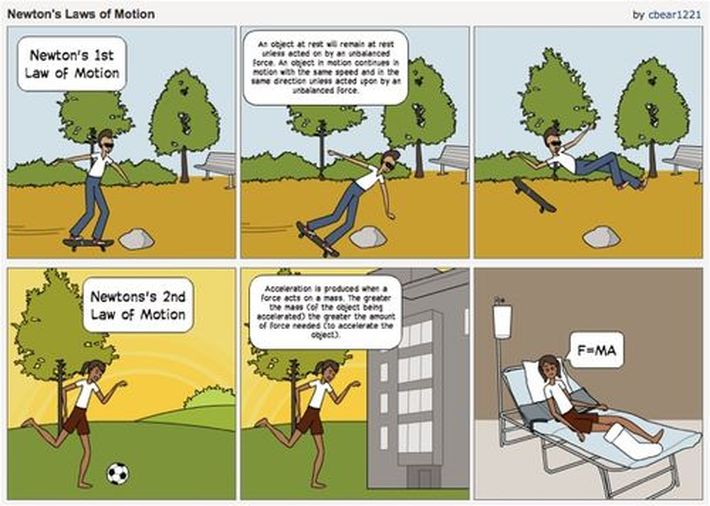