2. The tension in a string from which a 4.0-kg object is suspended in an elevator is equal to 44 N. What is the acceleration of the elevator?

3. A 2.0-kg block slides on a frictionless 25° inclined plane. A force of 4.6 N acting parallel to the incline and up the incline is applied to the block. What is it’s acceleration?

4. A 1.5-kg object has a velocity of 5j m/s at t = 0. It is accelerated at a constant rate for five seconds after which it has a velocity of (6i + 12j) m/s. What is the magnitude  of the resultant force acting on the object during this time interval?

6. The total force needed to drag a box at constant speed across a surface with coefficient of kinetic friction mk is least when the force is applied at an angle q such that

8. A block is pushed across a horizontal surface by the force shown. If the coefficient of kinetic friction between the block and the surface is 0.30, F = 20 N, q = 30°, and M = 3.0 kg, what is the magnitude of the acceleration of the block?

9. Two blocks in contact with each other are pushed to the right across a rough horizontal surface by the two forces shown. If the coefficient of kinetic friction between each of the blocks and the surface is 0.30, determine the magnitude of the force exerted on the 2.0-kg block by the 3.0-kg block. 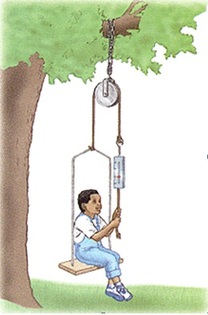 a) Show that the acceleration is upward and find its magnitude.
b) Find the force the child exerts on the chair.

3. A 2.00 kg block is given an initial speed of 2.50 m/s up a plane inclined 15.0o with the horizontal. The coefficient of kinetic friction between block and plane is 0.250. What speed does it have just as it returns to its initial position?